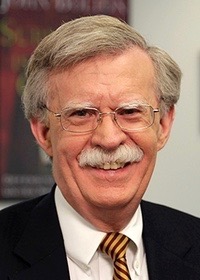 Give the Nor’easters hitting the Northeast this month, it appears March came in like a lion and the lamb relocated to Florida for the weather. … John Bolton, the selection to be the next President Trump's national security adviser, has a well-known belligerent attitude on foreign policy.

The latest was when he threatened to huff and puff and blow down the house of North Korean dictator Kim Jung Un unless the latter curtails his country’s nuclear weapon development…. Russian president Vladimir Putin easily won re-election with 90-percent of the vote. That ensured there was no need to open the record 40 million absentee ballots. … As a way of cutting the estimated cost of President Trump’s border wall, some conservatives are calling on Americans to link arms along the border chanting, “Red rover, red rover, we dare you to come over.” …  After the University of Kentucky’s unexpected loss to Kansas State University in the NCAA basketball tournament, plans were underway in the Blue Grass State for the ritual sacrifice of the losing coach.