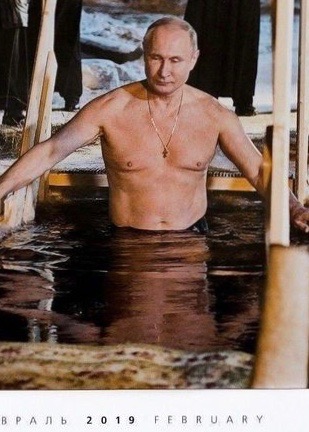 The coffee container at the 7-11 had a decal for the “Rainforest Alliance”, an environmental organization. I looked at the amphibian that was part of the logo. I asked the guy at the counter, “Just how many frogs do they put in the coffee?”

“There’s no frogs, sir." “Good, I still remember when Starbucks offered a coffee with a taste of forest freshness and I ended up with bark in my mouth.… With the baby boomers swelling the ranks of the older generation, some enterprising local ladies out on the street are offering senior citizen discounts. …  Russia president Vladimir Putin is show getting out of a lake bare-chested as part of the celebration of Russian Epiphany. It’s part of Putin’s annual calendar. Supporters are urging President Donald Trump not to emulate his Russian buddy. However, the thoughts are he could use his comb over to disguise the paunch. Putin also has a month in which he holds a puppy. Trump would be more likely shown holding a sandwich. Putin has more ambitious project the "Dictators of the World Calendar for 2019. North Korea's Kim Jun Un insists of having nine months.… Latest Star Trek toys, ”Borg Cubes” available in stacks of 10.  Also, potentially popular, the Borg Queen figurines in Happy Meals. But that’s probably as bad an idea as the Sweeney Todd line of ladyfingers sold at Mrs. Lovett’s meat pie shop. … Just saw ads for the new “Dancing with the Stars Jr.” I am waiting for the upcoming CSI Jr. in which pre-teens fight crime among the low lifes of the younger set.