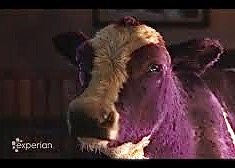 I watched a movie, “Village of the Damned” last week. After a a mysterious sleep all women a certain towns are pregnant and have children born at  same time with same white blonde hair and eerie eyes.

Sort of like lot of places I know in Kentucky. … I was relieved to find out the emu oils in Blue Emu, a cream for achy joints and muscles, ia not made by pressing the oil from emus.  In related news, there was a tragedy on a set filming commercials when the Experian Cow trampled Liberty Mutual’s LiMu Emu because it had just pecked the Geico gecko to death. ... . I might  say II never saw a purple cow, but when I finally saw one, so what? I never hope to see it again. Or something like that. ... It turns out the Experian cow is a bull and it has been learned the Experian bovine impregnated Elsie, the Jersey cow represents Borden. Sponsors are trying figure what awful color will come from blending purple and yellow in their offspring. ... Research has determined there were several unsuccessful “spokesanimals” that never made it to the TV screen, including "Warty", The Preparation H Toad “Warty” and "Runny",  the Heinz Ketchup Sloth.. … I guess with the COVID-19 virus around, the possibility of having a spitting contest to settle the presidential race has evaporated. Change that second consonant and I think that describes the first presidential debate.  … I have a bet placed on the “White House Infection Pool” about which administration officials get the virus next. I won’t share my pick; it might jinks my chance to win.