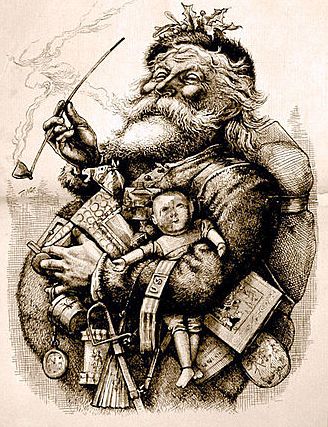 "Do you think the reindeer games Rudolph couldn't play were anything like the hunger games?" a friend asked. "Yeah, the reindeer battle it out and the last one left alive gets to pull Santa's sleigh," I responded ... There must have been a millennial putting together one of those pictures features to scroll through on the web. It was promoted as "Rarely Seen Historical Footage" and photograph of John F. Kennedy Jr. saluting his father's casket.

... The local Stop N' Shop supermarket chain has a Solution Center instead of a customer service station. It also sells cigarettes, which I suppose is a solution to breathing. ... Who said measure twice, cut once? The guy about to undergo the first circumcision. .... Santa Claus Inc. has been taken over by a private equity group. It plans to grow revenue by imposing a surcharge on gifts delivered to children and will gradually phase in a series of rebates. Meanwhile, several states have begun sending notices of sales tax due to recipients of Santa's largesse. When Santa comes to town, it invokes nexus, agencies are maintaining. ... In the remake of "A Christmas Carol", Scrooge is visited by the ghosts of three Kardashians—past, present and future. They promise him six more weeks of winter if they see their shadows. ... Pope Francis has recognized a miracle performed by Mother Teresa, part of the process of canonization. The real miracle will be if he can get the Republican-dominated Congress and Democratic President Obama to agree on a budget.